Santideva the Way of the Bodhisattva 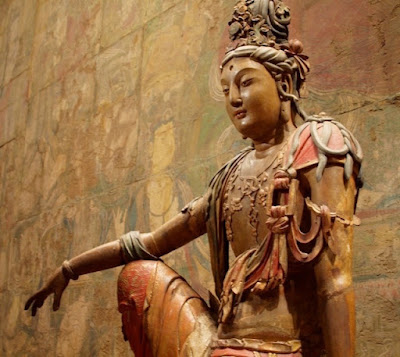 It was the craziest, the scariest… It was the smartest step I’ve ever taken, buying myself that ticket to Kathmandu. Let me first say, I do not think a life in Nepal is for everyone. But when reflecting on the more than a year I’ve spent here I’m overwhelmed by a sense of gratitude for what I’ve experienced so far, and also a trust that there is more to come.
In my first year at the Shedra I had the great fortune of studying Śāntideva’s, “The Way of the Bodhisattva” – the title says it all. In his text, the first century Buddhist master expounds on the meaning of becoming a bodhisattva and I’d like to share a few thoughts on why the bodhisattva path is just as relevant and perhaps even more challenging within the capitalist societies of today’s world.
Entering the bodhisattva path is a willingness to transform into a super-human. According to the tradition, bodhisattvas are “…heroic, indefatigable beings…who generate the supreme thought of enlightenment and who strive in the practice of the six paramitas…”[1] Bodhisattvas not only promise to attain awakening, but also pledge to relinquish a self-cherishing attitude and dedicate themselves completely to the welfare of others. This quality of putting others first and to work ceaselessly for the benefit of all beings is what characterizes a bodhisattva as a super-human.
Buddha-Dharma practitioners formally become aspiring bodhisattvas through a ritual in which they receive the bodhisattva vows and commit themselves to putting the vows and trainings into practice. The most fundamental of these precepts is “not to forsake any sentient being.” As I understand it, this means to generate appreciation for all sentient beings and embrace the world with a humble attitude of appreciation and carefulness. Zen master, Dogen, explains:
It is not only that there is water in the world, but there is a world in water. It is not merely in water. There is a world of sentient beings in clouds…There is a world of sentient beings in the world of phenomena. There is a world of sentient beings in a blade of grass. There is a world of sentient beings in one staff.[2]
Dogen invites us to contemplate upon the preciousness and vastness of sentient beings. The bodhisattva vow allows us to recognize and appreciate the presence and existence of others – sentient beings – so that we can genuinely give rise to an attitude of taking care of them and become responsible for their welfare.
A sincere attitude of appreciation and carefulness – two essential aspects of the bodhisattva vow – seems foreign to capitalistic values and ideals. The capitalist worldview stresses a utilitarian relationship where there is no real care for others nor for the environment. Eduardo Galeano, in an article titled “Use it and Throw it Away (translated title),” depicts the capitalist spirit by saying: “In the realm of the ephemeral, everything immediately converts into waste so that demands, debts and gain are multiplied…”[3] On the other hand, the two aspects of the bodhisattva vow, appreciation and carefulness, counters capitalistic values by seeing the needs of others as more valuable than the needs of the self. Therefore, we can argue that appreciation for others and taking care of others show an ideal that directly challenges the capitalistic values.
That bodhisattvas are not in accordance with capitalistic values shows that, in most countries today, to take and specially to maintain bodhisattva vows is akin to being a super-human – an extraordinary being that goes against the mainstream capitalistic values of materialism and egocentricism.
Pledging to become a bodhisattva does not only entail immense courage, but it also denotes great significance, particularly when wanting to contribute to the world in which we live in, by taking on a true responsibility.
By taking and keeping the vows of a bodhisattva, we allow that part of ourselves that wants to be heroic, to reveal itself. We dare to go beyond attachments and habitual patterns, the root of suffering. Śāntideva emphasizes that aspiring bodhisattvas give up bodily attachment before we waste our lives striving for sensory-pleasure, fame, praise, gain, and so forth[4] – signs of success in a capitalist system.
It becomes evident that there is a significant tension between that which is valued and stressed in capitalism (a strong sense of “I” and “mine”) and the bodhisattva’s approach, where one heroically trains to give everything away (including ones own body) for the benefit of others.
It’s known that salmon swim upstream, against the current. Similarly, bodhisattvas living within today’s capitalist context must move against the mainstream. But an extraordinary thing about the bodhisattva spirit is that they somehow remain fully engaged in the world around them, nourishing sentient beings wherever they happen to swim. While living within our current society, it is easy to forget, and so we must make a point to remind ourselves, that we cannot fully embrace the bodhisattva path unless we increase our appreciation and care for all sentient beings. It’s the only way to inspire more bodhisattvas.
[1]Khenpo Kunzang Pelden. The Nectar of Manjushri’s Speech: A Detailed Commentary on Shantideva’s Way of the Bodhisattva. Padmakara Translation Group, (Boston: Shambhala Publications, 2007) 32
[2] Dogen. Treasury of the True Dharma Eye. (Boston: Shambhala, 2012) 606-607.
[3] The original quote by Eduardo Galeano in Spanish, which I translated into English is the following: “En el reino de lo efímero, todo se convierte inmediatamente en chatarra para que bien se multipliquen la demanda, las deudas y las ganancias…” Eduardo Galeano, “Úselo y tírelo,” El País (April 9th 1994) / http://elpais.com/diario/1994/04/09/opinion/765842411_850215.html
[4] In the Buddhist doctrine these are considered to be within the “eight worldly concerns.” Basically, they refer to the objects in which we, deluded human beings, put our trust when we are aiming for the experience of happiness. Capitalism can only survive through the emphasis (and “selling”) of these concerns. Buddhism, on the contrary, stresses the need to detach oneself from these mundane affairs, that ultimately bring nothing but suffering.

My Experience Learning Sanskrit at RYI

What I want and what I need