The Blessed Rice in Nepal 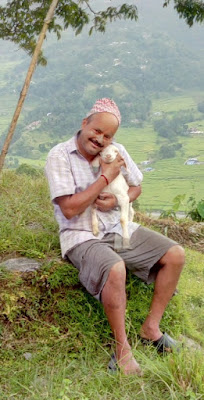 Nowadays, people always talk about eating healthy. Therefore, black rice is well-known as the food which has the highest levels of antioxidants. The well-known black rice such as Indonesian black rice and Thai Jasmine black rice are made in those maritime countries. However, there are few people knowing that there is also black rice in Nepal and this kind of black rice had been blessed by the God of kindness—Bungadyah.

The history of the black rice in Nepal started from the invasion by a King of Palpa called Mukunda Sen. At the beginning of the invasion, Mukunda ordered his soldiers to dig many trenches and hide all the rice which was harvested from all fields in Nepal. Mukunda was trying to create a starvation in the city. When he attacked the city of Lalitpur, the people in Lalitpur took the image of Bungadyah around the city. The priests performed a ritual bath to the image and asked for protection from the invasion and the starvation. When people realized that Mukunda came to attack the city with his soldiers, all people ran away from the prayer with their fear. When Mukunda got in the city, there was no one in the city.
At that moment, there was a downpour in the city and half of his armies were carried by the flood. After the downpour, a naga, who was known to have a connection with Bungadyah, appeared in front of Mukunda and told him, “This land has been protected by the God of kindness—The Lord Bungadyah.” Having witnessed the miracle and showing his apology, Mukunda bowed down in front of the Bungadyah’s image and offered his greatest valued silver chain, which was hung around the neck of his horse, to Bungadyah. For receiving Mukunda’s apology, the image of Bungadyah lowered his head to receive the silver chain from Mukunda’s both hands.
After the city was freed from Mukunda’s invasion, the farmers dug up the rice which had been hidden by Mukunda in the trenches. Through the blessing of Bungadyah, the rice had turned black but it was still good to eat; and this kind of black rice is found to be very light, easily digestible, and especially good for those who are in poor health. This is the story of the black rice in Nepal. When you are in Nepal, it is a good idea to try some black rice. It is very healthy and maybe you can receive the blessing from the God of kindness too.