Philosophy studying at RYI what am I?

Basking Under the Dharma Sun 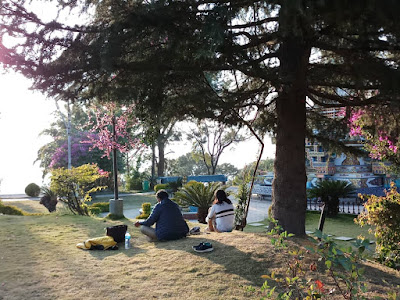 “Buddhist Studies? Wow, so interesting. Where?” starts the familiar drill.
“In Nepal,” I reply.
“Oh!!…..where in Nepal?”
“In Kathmandu.”
“Oh okay….is it in the main city of Kathmandu itself?”
“Yes, but not in the city center. It’s in a neighborhood called Boudha.”
“Ahh..alright. What did you say it was called?”
“Rangjung Yeshe Institute.”

This is often followed by a head nod, an “Ahh, I see…,” or the plain old awkward silence. Sometimes though, I am given an eager look anticipating a response, as if just uttering the name of the college was insufficient without an explanation of the intentions behind my decision.

As I finish my semester of classes, this interrogative expression doesn’t confound me as much as it did before moving to Kathmandu valley. Having to state the series of causes and conditions that contributed to me quitting a job I loved to study Buddhist philosophy was quite the ordeal. And trying to fit the decision to study in the Himalayas into a narrative that was coherent and palpable to the other person was daunting.

The question rang loudly in my ear, even when there wasn’t another person asking it- What am I doing at Rangjung Yeshe Institute?

Someone once said, “it is not the answer that enlightens, but the question.” So in this post, I have decided not to answer this question in any straightforward fashion but to unpack it.

Rangjung Yeshe Institute was envisioned by Chokyi Nyima Rinpoche, the abbot of Ka-Nying Shedrub Ling Monastery in Boudha. “Chokyi Nyima” means “the Sun of Dharma” in Tibetan, a fitting name for someone who heads a college dedicated to preserving and sharing the light of the Buddhist Dharma (teachings) to all and in as many languages as possible.

So many verbs to list- doing so much here! I’m taking classes and writing papers, of course. I’m also getting to know the mother of my mother-tongue- Sanskrit, and reading books from our cosy library’s vast collection of Buddhist works. And I’ve been spending  quality time with the eclectic group of people who study here.

Something I discovered here was that I had a Vitmanin D deficiency. Apparently I am not getting enough sun. So I have been spending a lot of time outdoors as well, doing hikes to nearby places like Nagi Gompa and Kopan, and letting my skin soak up all that high-altitude sunlight we get here.

Is it possible to have a whole course dedicate to this question? At RYI, yes. The “Fundamentals of Buddhist Philosophy” class this semester was structured around the idea of no-Self.

We didn’t just deconstruct the self philosophically but were asked to inquire in our meditation: Who am I? Or, as the Buddha revealed, to ask not “who” but “what,” as we are composed of a dynamic set of forms, feelings, perceptions, mental conditioning and moments of consciousness, all of which are mere dharmas, or phenomena, that arise and cease. And since this “I” is dynamic, composite and dependent on various doings and beings, processes and circumstances, it would be silly to go about answering the question in any absolute fashion. Instead, we strive to describe the immediate experience as it is.

In my case, what’s that?

Owing to a lack of Vitamin “D,”  it is basking under the Dharma Sun.