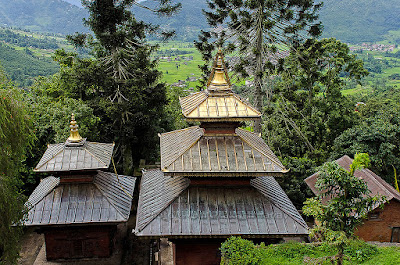 This year (2017), on September, RYI Students along with the Staffs went to Sankhu for pilgrimage trip. It was an amazing experience for all of us. Sankhu is an ancient Newar town located in the North-Eastern corner of Kathmandu valley.
Sankhu was once an important stop on the old trade route from Kathmandu to Lhasa (Tibet), but this historic settlement was severely damaged by the 2015 earthquake, so it is under renovation process. The temple of Vajrayogini is
one of identity of Sankhu. It is situated on the middle of hill. The goddesses are worshiped with high beliefs, by both Hindu and Buddhist.

This place is also known as the Eighty Siddhas as there are four caves where the Siddhas of India are said to have stayed. The oldest inscription found in Sankhu is dated 538 AD. There was a myth which says the Vajrayogini temple was built by King Prakash Malla in 1655. It is one of the best attractions of Sankhu for national and international tourists. It enriches the main sacred representations of the site, Ugra-tara manifesting as Ekazati, which are said to give very powerful blessings, particularly the image in the upper temple.

The image in the lower temple is red in colour with one face and four arms. In the upper temple is an identical image of Ugra-tara. The attraction here is not only the various temples but also many other interesting temples and caves which surrounds it – some of which are considered to be older than the temple itself. Among the caves in the area is a tiny chamber built into a small cliff which was where Milarepa stayed in for solitary retreat.