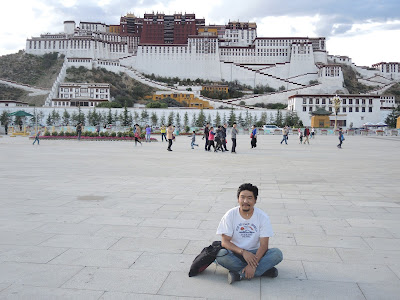 Namo Buddha, one of the most sacred Buddhist pilgrimage sides in Nepal, was blessed by the Buddha out of his limitless compassion and generosity for sentient beings.
Since then the place has become a sanctuary for pilgrims. It is the greatest source of direct blessing from the Buddha, and the ‘classroom’ where still anyone can learn the prowess of the Buddha in the course of saving countless ignorant beings from suffering.
Just visiting the cave where the Buddha performed the greatest act of human generosity the area, one is enfolded by the compassion of the Buddha. Spending a few days there, one is removed from afflictive state and levitated in the sphere of blithe. Under the great bless and vision of a Tibetan Bodhisattva, the place’s sanctifying potency has been enhanced, the actual words of the Buddha in thousands volumes are studied with the inspiration that had been planted there by the Buddha.
The learning center, with such a magnificent temple surrounded by many large structures steep near the peak of the steep mountain symbolizes the ever-inspiring story of the land.
A week long stay there made me very fortunate to see the show of Buddhas and their embodiments’ dharma activity, and also taste the serenity of mind that is Buddha’s essence. I was infused with a great hope for following generations through seeing the generosity of elder monks and masses of cute and innocent little monks.
Thus, we are not at all hopeless. We are always protected by the entourages of Buddhas, the deity and dakinis. We are nourished by the compassion of Buddhas and served by the Bodhisattva.
~Champa from Tibet