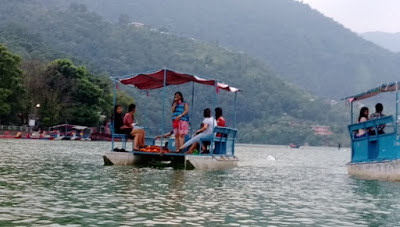 Long time ago, there was a couple demons living in Nepal. Their names were Unmantak Bhairav and Harati. They had 500 children in their family. Because of many children, Harati had to catch many human children from the village and feed their own children. After a while, the villagers suffered very much from losing their children. The people went to their king with their suffering and asked protection from the king.

However, because Harati was very powerful, the king could not do anything to protect the children from Hatati’s attract. At the end, the king went to the Buddha and requested the solution to save the children.

One day, after the king requested, the Buddha went to the place, where Harati’s family lived and hid Harati’s youngest girl, Jilam Mayaju, in his alms bowl. In the evening, after Hatati came back home, she found out that her youngest girl was lost. She suffered and distressed. She very madly cried loud much over her lose with her broken heart. Then later, the Buddha appeared in front of her and asked her what made her cry. Harati told the Buddha of her suffering and difficulty from losing her girl. Later on, the Buddha told her that the suffering she gained was the same as the suffering of the parents whose children had been caught by her in the village. After this realization, Harati made her promise to the Buddha. She will not harm the children anymore and she will protect the children as her own children. After her promise, the Buddha told her youngest girl to come out from his alms bowl and join her mother. Harati thanked the Buddha.

Since then, her temple had been built near Svayambhu stupa for her to protect the children in Nepal. She had been called as the guardian angel of children or Ajima Dyah – the Goddess Grandmother.