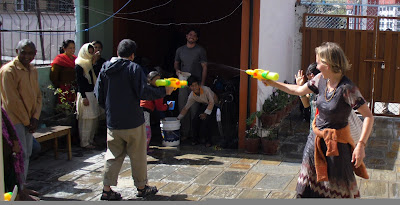 “Wooow! Here I am back again! And I will go for the second year!”
This is what I thought last week when I found myself lying once again on my back-breaking Nepali mattress inside my tiny student’s apartment that I had swapped for my fancy German  two-and-a-half-room-apartment one year before. At that time, since I had only arrived one day before classes started, I had not even had the time to think about getting settled in Boudhanath. Instead, I had been completely occupied with learning how to spell my first Tibetan words and how to cope with the whole bunch of literature that we had to read for the History class.
I had also been occupied by finding out how to get a new cell-phone (since my old one had disappeared in the first Nepali toilet that I had gone to) as well as to remember the name of my grandfather (who passed away 50 years ago) in order to open a Nepali bank account. I was completely absorbed with trying to get to my Lamas’ monastery without having to pay golden prices for GHPs (“Golden-Hair-Persons”) in the Micro, and instead of going for a bicycle ride or a walk in the afternoon – which I used to do in Europe – I just dived into the crowd at the Stupa and did Koras like everyone else in Boudha.
Further, the first weeks of the semester had some more surprises for us new students ready – such as the middle-sized earthquake that interrupted my weekly shopping at Bhat Bhateni’s and one big thunderstorm that came over some of us during our visit at Trulshik Rinpoche’s Kudung, which made the big Sherpa tent collapse and bury us all underneath, together with approximately 200 nuns, monks and lay people as well as one ton of cold water. At that time, I did not know, yet that I was going to have cold showers for the whole winter up until the Holy festival …
I had been aware of saving resources before, but my first winter in Nepal made me an expert in doing the cooking with a minimum of gas and in planning my working schedule for writing my papers after the exact amount of power left in my laptop battery that I needed before the electricity would be switched on again. I had also learned that it can be really nice to spend New Years Eve just lying cozily under three layers of bedsheets while listening to Bach’s b-Minor Mass – something I had never done before. 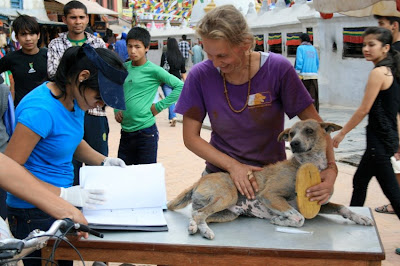 I had made a lot of friendships within a short time and, after having started voluntary work for streetdogcare, every single dog around Boudha Stupa also became my friend quite soon. Since then, I have never been able to get to class in the morning without my outfit having been completely wrecked by some crazy dog who wanted to say Hello to me. But nevertheless – all these experiences taken together I had found to be an excellent blend of living, studying and practicing the Dharma during my first year in Boudha!
So, one week ago, after a long summer break, when I was once again lying on my back-breaking Nepali mattress inside my tiny student’s apartment that I had swapped for my fancy German  two-and-a-half-room-apartment, it came to my mind that I would never again want to miss all this and that I am so happy here. “Thaaank you, Buddha!”
Isn’t it amazing how we have all found our way here?
~Judith from Germany