Dilemma of a Life Time

December 31, 2011 by Admin
The first time I came to Kathmandu one year ago, I was on my way back from China. At that time, my plan was to stay for a month in order to learn some Tibetan.  Here’s a lesson I learned quickly.  Plans change.
My first impression of Boudhanath was that I could eat a variety of food for very low prices. After my time in China, I thought I could once more taste any European food I wanted. I settled down to eat at the Double Dorje ‘Restaurant’. After eating, I no longer knew why people called it restaurant. I later discovered that any place where you can have food is called restaurant in Kathmandu even if the food bears an uncommon resemblance to cardboard. Even so, my fatal error was choosing a mysterious drink called ‘lassi’. The consequences were frequent bathroom visits for a few days.  The silver lining was making the acquaintance of a Tibetan doctor named Dr. Sherab.  I soon felt better.
After a few days of exploring the Boudhanath neighborhood, I discovered the White Monastery. It houses the Rangjung Yeshe Institute, which most people simply call ‘the Shedra’. It was the last days of August, the fall semester was about to begin. In the office of the Institute, I was invited to attend one week for free. Naturally, I agreed.
My enjoyment of this week of studies plunged me into the dilemma of a life time. I had just graduated after six years of intensive study in Bauman University in Moscow, and I was planning to settle down in Belgium with a computer-job.  But… suddenly I possessed a great opportunity to study the Dharma and the Tibetan language. I thought that if I went back to Europe, I would never have the determination to come back.
I stayed! I still can’t believe it! Here I am in Kathmandu, one year later studying the Dharma… and I am even used to the food!
~Yura from Russia 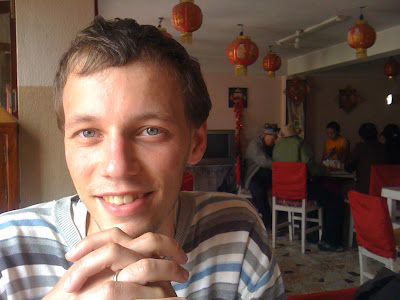