Grandeur of Tibetan Monastic Training and Some Reflections

October 14, 2019 by Admin
I have lived in Nepal for almost one year and I feel extremely fortunate to study Tibetan language at the Rangjung Yeshe Institute (RYI). RYI, being the Buddhist Studies center of the Kathmandu University, is a very unusual kind of an institution considering the Western notions of academic colleges and universities. The most noteworthy feature of RYI is its location in the environment of the Ka-Nying Shedrup Ling monastery. While RYI is based on a modern academic curriculum taught by professors trained in Asian, American and European universities, its neighboring shedra (the monastic school) has monks studying in the intensive Tibetan methods of education. In addition to experiencing the vibrant daily activities at the monastery, I also consider it a privilege to attend classes taught by the Lopons and Khenpos from the Ka-Nying Shedrup Ling monastery. I have had many interesting experiences while studying at RYI, staying at International Buddhist Academy, and being in the sacred city of Boudha. 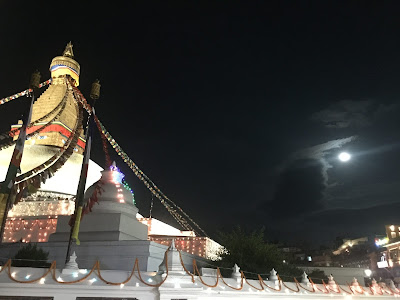 As a Bangladeshi Buddhist monk, brought up in a traditionally Theravāda culture, and studied in Sri Lanka for almost ten years, I have often been asked to express my impressions about Vajrayāna Buddhism. Vajrayāna Buddhism is an enormous subject and making categorical statements about the distinctions between Theravāda and Vajrayāna requires careful observation and analysis. In Nepal, one form of Vajrayāna is practiced by Newar Buddhists and another form of Vajrāyāna is followed by denominations of Tibetan Buddhist lineages among Tibetan refugees and Himalayan Buddhists. There are overlaps in terms of the deities invoked by the Newars and Tibetan Buddhist lineages but there are also significant differences in the nature of their rituals, monastic structures, ordination systems and so on. It is not possible to elaborate on these within the space of this short article. However, I would like to reflect on a few points about the Tibetan monastic training that have drawn my attention during this past year. 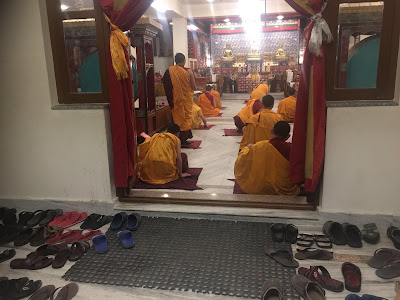 First and fore-most, I think the grandeur of Tibetan Vajrayāna Buddhism is visible in almost every aspect of the material and religious culture. This is evident for example in the monasteries with hundreds of monks; shrine hallswith large Buddha statues and intricate murals; elegant thankas with paintingsof mahāsiddhas, Buddha-fields, and cycle of existence; the pujaswith magnificent drums and dungchen (dharma trumpets) and so on. In all of the Theravāda world, I think, it would be hard to find monastic institutions as large as Drepung Loseling, Ganden, Sera Je and so on. One may mention the network of Dharmakaya monastery in Thailand. Dharmakaya is a modern movement that claims to present Buddhist ideas, discipline and meditation to fulfill the needs of the 21st century and produce highly skilled and disciplined monastics to that effect. It is a special example, not the norm in Theravāda countries. Compared to the Tibetan shedras, the Sri Lankan pirivenasare also not as massive and their curriculum not as diverse. Modern Buddhist colleges and universities in Theravāda countries is noteworthy in this regard. They follow western academic training and train Buddhist monks and nuns for Masters and PhD degrees. However, the training in these colleges and universities is not exactly the same as in the Tibetan shedras. While Theravāda countries have adapted to Western academic methods by establishing colleges and universities, the Tibetan shedras are exemplary in retaining a traditional education system.
Ka-Nying Shedrub Ling, Shechen and Kopan monasteries in Kathmandu with more than four hundred monks in each are definitely not as large as the ones in Tibet or South India. Yet, they can be considered as mini-models of those mega monastic complexes. My Tibetan monastic friends find hard to believe when I say there are only three monks in the monastery at my village in Bangladesh. In Bangladesh, we have extremely few institutions for monastic training accommodating fifty to hundred students or more. The training in these institutions is also insignificant compared to the elaborate curriculum and nine to eighteen years of rigorous training in Tibetan monasteries. There are some monasteries in Bangladesh where monks follow strict discipline and do systematic study and translation of Pāli texts. Otherwise most monks study in schools and colleges. There are also others who follow a secluded life dedicated to meditation practices in forests. This is to say that Buddhist monasteries in Bangladesh and other Theravada countries do have good education institutions for the preservation and transmission their culture. But compared to the Tibetan monasteries they are not as enormous and diverse in their curriculum. 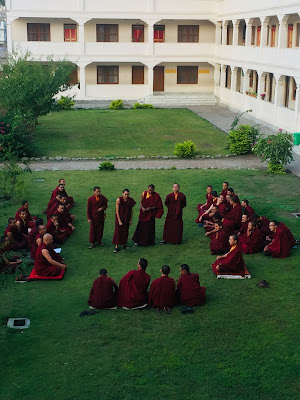 I am sure it requires excellent organizational skills in maintaining these large monasteries while providing excellent quality training for their monks and nuns. I am fascinated by not only the organizational aspects of maintaining these large monastic establishments but also their academic curriculum. The Tibetan monastic education system takes pride in retaining the intellectual and scholastic culture of Nalanda Mahavihara of medieval India. The subjects in the curriculum include logic, philosophy, Tantra, Vinaya (discipline) and so on. The monks go through not only a rigorous academic training – memorizing important root texts, studying commentaries, and debating on them – but also participate in elaborate daily rituals dedicated to protective deities or commemorating important auspicious occasions. Training young monastic members for Thanka painting (for example at the art school at Shechen monastery) and the Chamor Lama dances is also remarkable aspects of the Tibetan monastic education. In that way, I feel the curriculum in these monasteries is very extensive and complete – in the sense that academic, ritualistic, and artistic aspects are all included. Compared to Theravāda institutions, the debate, paintings, and lama-dance are especially distinct elements of Tibetan monastic training. HH Dalai Lama’s openness to science – for example, sending monastics to Emory University to study science and establishing science laboratories in major Gelug monasteries – add yet another dimension to the far sightedness and inclusive nature of Tibetan monastic education. 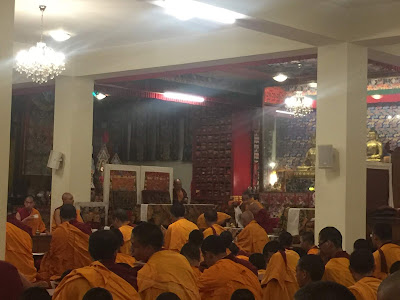 In spite of this grand, rigorous, multifaceted training, I see a short-coming as regards their understanding of Theravāda Buddhism. In many conversations, I had with monks trained in this kind of education system and even foreigners who have been studying Vajrāyāna Buddhism, I observe a common misunderstanding when they refer to Theravāda as Hīnayāna. This misunderstanding is based on medieval Indian Buddhist texts as presented and interpreted by Tibetan scholars. This is not merely a mis-recognition, using a classical polemical term to refer to a contemporary Buddhist tradition, but also complete misunderstanding of the Theravāda Buddhist history and practice. I have heard many tell me that there is no bodhisattva practice in Theravāda Buddhist tradition. Such ideas ensue from a presentation of Buddhism in Tibetan manuals defending the Mahāyāna tenets and referring to other traditions of Buddhism in medieval India as inferior to them. I have come to realize through these statements that despite their extensive academic curriculum and openness to science, the Tibetan monastic system pays minimal attention to the Theravāda Buddhist texts and practices. They are completely unaware of Buddhaghosa, the great fifth century Theravāda scholar and commentator, and his magun opus the Visuddhimagga. The Milindapañha,recording the debates between a Buddhist monk named Nagasena and the Greek king Menander (Pāli: Milinda) is also unknown. Most importantly, they are unaware that texts like Buddha-vaṃsa, Cariyā-piṭaka, Jātaka-aṭṭhakathā, Dhamma-padaṭṭhakathā – present elaborate ideas of bodhisattva practice are also not known to them. I observe that while Mahāyāna texts like Saddharmapuḍarīkasūtras, Nāgārjuna’s Mūlamadhyamikakārikā, and Śāntideva’s Bodhicaryāvatāraare studied in some university curriculums in Theravāda countries, Tibetan monastic institutions are yet to include Theravāda texts into their academic curriculum. Theravāda scholars study Nāgārjuna not only as a Mahāyāna philosopher but also as an important thinker in the history of Buddhism. Similarly, Śāntideva’s teachings have relevance for all people.
I am aware that Theravāda institutions can still be more inclusive of Mahāyāna and Vajrayāna texts, and the works of great Tibetan scholars. I think the Tibetan shedras can also make rooms for Buddhist texts from other traditions. The Nalanda-centric understanding of Buddhism reflected in their pedagogical training simply overlooks the point that long before the establishment of Nalanda, Buddhist scholars in Sri Lanka, China, Middle East etc. had already made important contributions to Buddhism. I am aware that there are many great Buddhist texts and within a short life span it is not possible to read every one of them. However, at least having an awareness of the great works of different traditions would enable us to have a more expansive understanding of Buddhist history, culture and practices. Even a basic introduction to what others in a different tradition are studying would eventually open up the imagination and interest of future scholars to enrich their knowledge and practice in a significant way. This would also save us from the negative karma of perpetuating wrong knowledge about others. However, despite their limited knowledge of the Theravāda texts and practice, I continue to be fascinated and inspired by the Tibetan monastic education system that for many centuries have been producing highly talented and scholars, philosophers, meditation masters, poets, painters, cham dancers and above all wonderful and gracious human beings. I hope this method of education continues forever.
Upali Sraman from Bangladesh