The Hidden Story of the Golden Temple at Patan 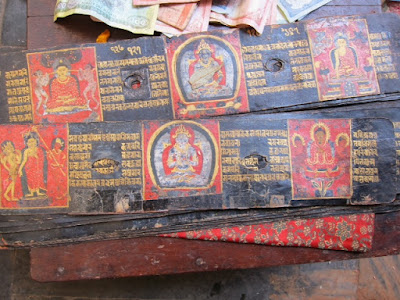 There are many stories in Nepal. Because these stories are very interesting– as last time I had shared the story about the Jacket from the Naga land— I would like to introduce the story of the Golden Temple in Patan at this time.
When people talk about Patan, the Golden Temple will show up in everyone’s mind. The Golden Temple is one of the famous Buddhist temples in Patan. However, few people know that there was a love story, which was between a king and a queen, behind the holy Golden Temple.
Once upon a time, there was a king called Marwad and he had a lovely queen called Pingala. They loved each other very much. As a return for his lovely queen, King Marwad planned to make an image of Shakyamuni as a gift to her. When the image had been finished, another king, from other country, asked for a gift as a sign of good relations with King Marwad’s kingdom. For the people’s safety in the country, Queen Pingala chose to give up the image for the peaceful relationship with other country. The King promised to give her another one. However, in the second time, the king from the friendliest kingdom asked for the image. The queen chose to give up the image again for King Marwad to keep good friendship with his friend. After waiting for a long time, the queen Pingala had finally received the image from her lover, King Marwad.
Although the queen Pingala received the image, the lord of suffering seemed to not let her have this perfect life. Because the queen Pingala received great love from the King, it set up a jealous fire with the second queen. Finally, the queen Pingala had to leave the country with the image of Shakyamuni and she arrived at the valley of Nepal at the stupa of Svayambhu. The King of Nepal gave her a land in Vishalnagar for building a temple to install the image. The temple was known as Pinbaha.
The queen Pingala prayed to the image everyday hoping that she can see her husband again. Because of her great faith and diligence, she dreamed that if she fasted for one month, she would see her husband again. She undertook a strict fast as told by her dream and on the last day of the fast, the King Marwad really came to see her. That was because the King of Nepal told King Marwad how Queen Pingala built the temple by her own and observed a fast. When Queen Pingala saw King Marwad, she was very thankful that her fast had succeeded in seeing her husband again. However, because of her long fast and building the temple by her own, her body was exhausted. At the end, she passed away in her lover’s arms. After many years, the image was forgotten and a Buddhist priest of Patan moved the image into Patan. Therefore, the image of Shakyamuni is installed in the Golden Temple nowadays.
~ Lobsang Tsering from UK