The Best Food in Nepal 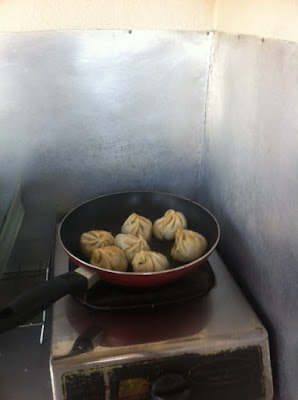 Nepal is nice in many ways but there is one way in which it is more wonderful and nice than many other places in the world and that is when it comes to the momos. All momos are nice, but one kind is superior to pretty much all food in all of Nepal, the buff momo.
It is the perfection of food, really. It is cheap, fast and available all over Boudha, and elsewhere. In fact, there are so many places that make nice momos that it would be impossible to list them all. It is enough to say that there are big places, small places, ugly places, decent looking places, shady places, hidden places and so forth that are full of spectacular momos, on every street and in every corner.
And there is more than just food and eating to momos! There are so many other benefits also that I have experienced around momos. It is perfect to eat before studying, and also after studying, like a unique fuel for midterms and finals and quizzes. After long empowerments, days, weeks, classes, years I have found that it gives me so much energy that all the hardships of life doesn’t really matter. In those moments where there is only the big plate of wonderful amazing glorious momos and a dear friend on the other side of the table and the little plate of soup to dip the momos in, life is more than good. Probably as good as it gets!
Momos are also tasty whenever you eat them. It is nice to eat them late at night, but also in the morning, and at lunch or anytime in between. And the more you eat the better they get. I would recommend everyone to never ever stop at a single plate when you can order at least two (but three would be nicer since you will have a mountain of momos in front of you then and such a momo mountain beats the cloudy/half invisible Himalaya Mountains you can see from Kathmandu any day.)
~Rebecca from Sweden