Visit to Serthar and the Larung Institute 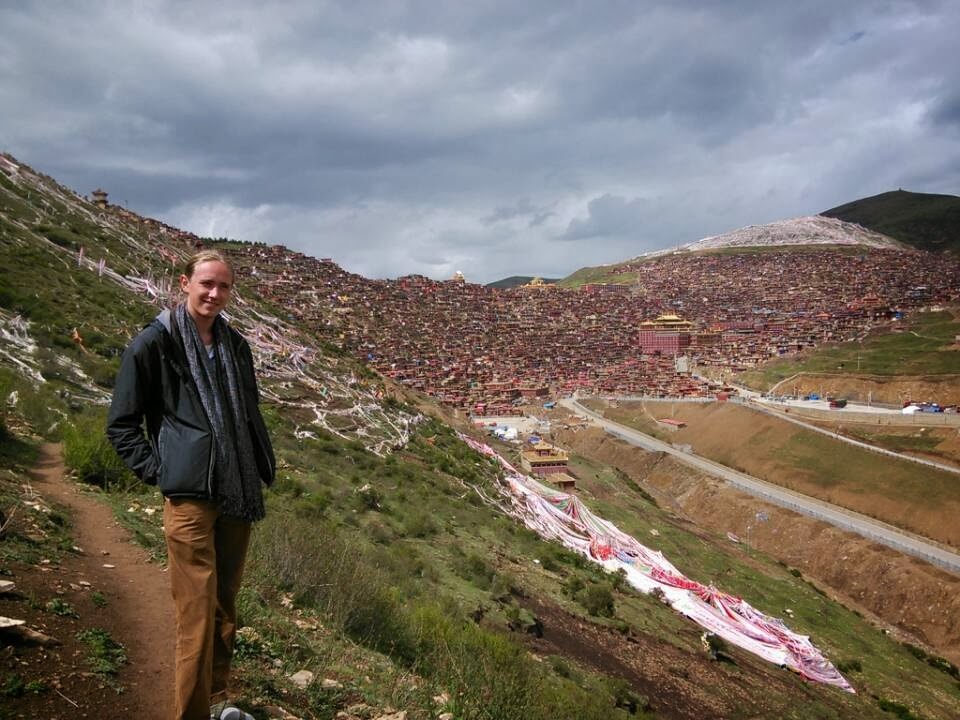 Before the start of the summer intensive, I had the great fortune to spend time in Yunnan and Sichuan. These two provinces include much of eastern Kham and bits of Amdo. So I was able to visit Tibetan areas such as Gyalthang, Dechen, Lithang, Dardo, Minyak, among others. However, one of the most special places I visited was Serthar.
I had never heard of Serthar (Tib: གསེར་ཐར། Ch: 色达) before but was lucky enough to have a travelling companion who had.
She suggested we go there and so we did. What makes Serthar so remarkable is the Larung Institute for the Five Traditional Sciences and Higher Buddhist Studies (Tib: བླ་རུང་ལྔ་རིག་ནང་བསྟན་སློབ་གླིང་།Ch: 五明佛学院) founded by the great Jigme Phuntsok, a renown Nyingmapa Terton. Larung is a massive monastic complex which houses around 40,000 monks, nuns, as well as some lay practitioners – all of whom study, live, and practice together. It is truly enormous!  Immediately upon arrival at Larung, my impression was that this is how the great Nalanda university of India must have been. That is, with vast numbers of monastics all engaged in the study and practice of Buddhist teachings in the traditional manner. I found myself very touched to be surrounded by what is essentially a city made entirely up of monastic scholar-practitioners. There are supposedly over 500 Khenpos in Larung. Another source of inspiration for me was to see that, of this innumerable population, there were many Chinese in robes. This is undoubtedly beneficial for both modern Buddhist ecumenism as well as the overall Tibetan situation.
There seemed to be four central points to Larung. These are (moving progressively up the hill): the lay person’s assembly hall (Lektso Charbeb Ling), the the nun’s assembly hall and shedra (Pema Khandro Duling), the monks assembly hall and shedra (Ngarig Nangten Lobling), and, on the very top of the hill, a large stupa. These study centers were enormous, each with over three stories of classrooms. Despite this, when it was time for all the monks to gather, there was virtually no free space at all. Overall the facilities seemed well equipped for a monastic college. Each classroom had a plaque above the door bearing the name of the classroom’s subject. There were, for example, classrooms for Abhidharma, Logic, Tantra, and so on. On the rooftop of the monk’s assembly hall was Jigme Phuntsok’s room. In here the vibes were high and the energy tangible. There was a life-size recreation of Jigme Phuntok atop his throne within a golden-gilded room. Just seeing this replica was very powerful – I cannot imagine what it must have been like to meet him in person! In addition to these buildings there were smaller temples, stores, a hotel, markets, and other various buildings scattered about. 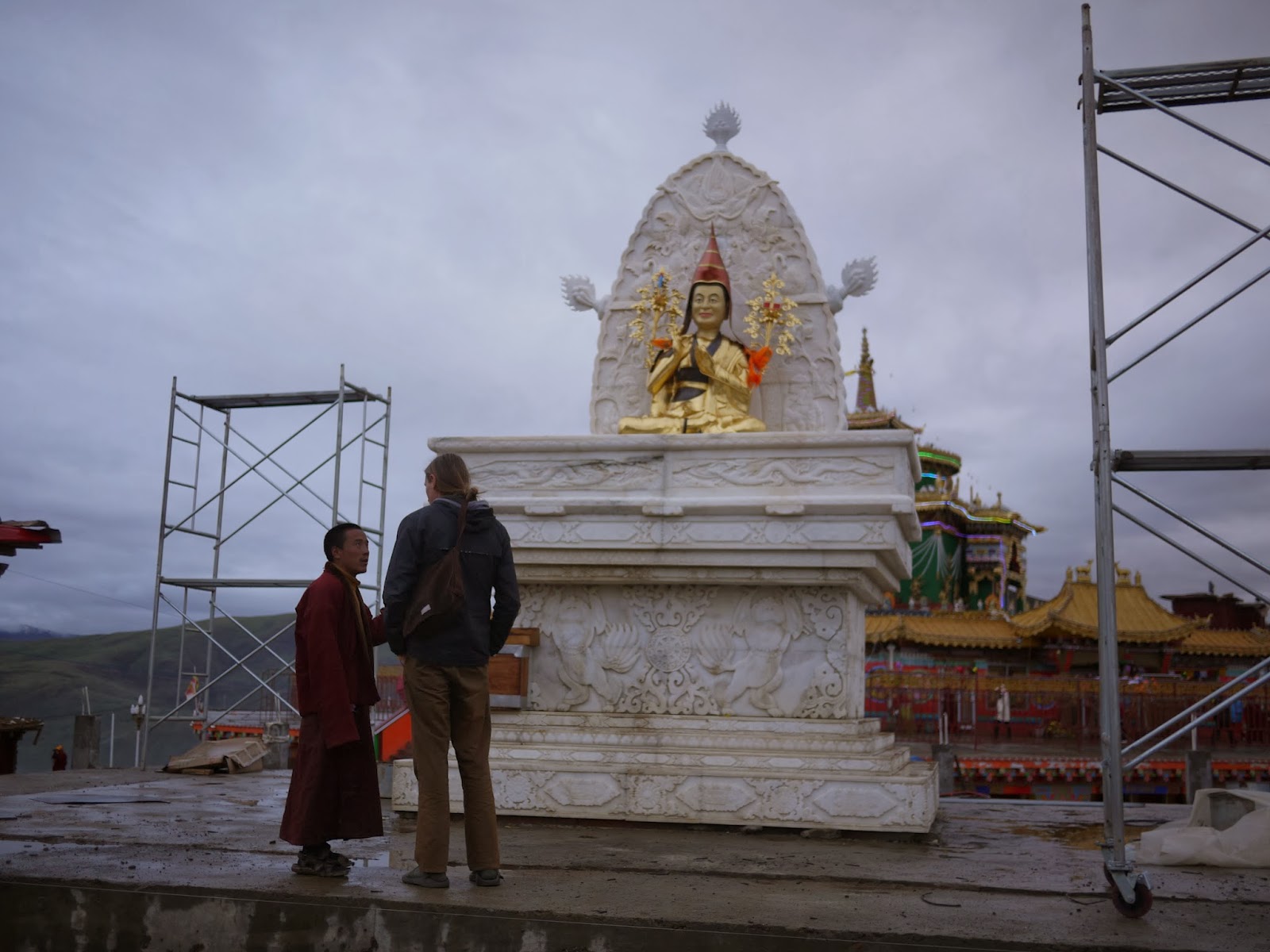 Except for these four main centers and other infrastructure, the rest of Larung consists entirely of residences. Given the large number of monastics, the housing is packed together extremely closely (almost reminiscent of slums). The buildings are constructed out primarily out of wood, as well cardboard and plastic. I can’t imagine this provides much insulation against the harsh Tibetan winters, especially when considering the fact I was comfortable with a jacket and scarf in the summer. The valley experiences power cuts in the winter as well which, as all residents of Kathmandu know, is certain to make life harsher. Additionally, there is no running water so all the monks and nuns must take potable water to their living spaces. However, judging from the room of a monk I became friends with, he had a sizable amount of space for just himself and, I must say, I found it rather cozy.
On the road to Larung I experienced no problems whatsoever. However, after arriving back to Nepal, I was told that this area is often prone to checkpoints and closure. All I can say was that I was certainly the only foreigner I saw during my time there, a fact which seemed to have surprised many a Tibetan. Yet what surprised me was the difference between Tibetans in Tibet and in exile. Just as one would expect to see differences between Indians and Chinese there was certainly a difference between the Tibetans I met there and the those I know from Nepal. And this was not only regarding language. You can see how things such as the products, writing, media, aesthetics, and so on which make up our environment affect a people’s outlook, behavior, and overall disposition.
I am truly blessed to have received this opportunity for pilgrimage. My hope is that the Dharma will continue to flourish throughout the world and that the great centers of learning – such as Larung, the Nalandas and Vikramsilas of the past, as well as our Shedra – will continue to be possible. Seeing Larung in all its glory while taking into consideration the current political climate,  I believe they will. My sincere wish is that this article contributes, albeit in a slight way, towards this vision and is therefore able to benefit others.