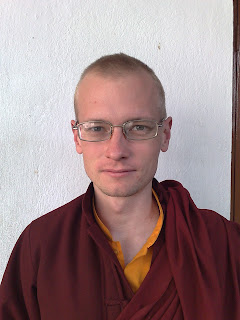 My roommate looked at me begrudgingly.  “Where are we going to put all of these?” he asked as another new box of Tibetan books or pechas arrived at our doorstep.  This was the last thing on my mind as I tore through the box’s tape to peer at the shiny new covers, breathe in the smell of the fresh pages, and rifle through the table of contents.
I’ll admit it.  I’ve become addicted to books.  And not just buying them.  This semester is the culmination of my studies at Rangjung Yeshe Institute.  I am currently summarizing into an MA thesis the most important things I have learned about Buddhism’s Middle Way Philosophy over the past five years.  These days I am constantly surrounded by at least three stacks of open books, my mind swimming in the perplexities and nuances of their contents.
The subject matter of my thesis is a debate.  This particular debate has been waxing and waning for nearly two-thousand years.  Throughout this vast amount of time, there have been fierce moments of blood curdling battle cries, as well as sobering moments of reconciliation.  Nevertheless, it would appear that a final resolution has yet to occur.
It must be admitted that the Middle Way, the philosophy of “non-elaboration” and “noble silence,” has an ironically scholastic bent, especially in the argumentative literature currently stacked up around my desk.  Are these controversies nothing more than the musing of monastics with an abundance of free time and, evidently, an inability to meditate on the ineffable?  I’d like to think there is more to it.
Indeed, many Buddhist scholars have expressed praise for debates for sharpening wisdom, establishing doctrine without even the slightest contradiction, and, perhaps most importantly, developing the qualities of faith and certainty.
This last point may strike one as strange for a “philosophical” religion such as Buddhism.  Indeed, the Buddha famously stated, “Do not accept my words out of mere respect, but test them like gold!”  Yet despite what decades of debate would suggest, he likely did not intend endless and indecisive bickering.  To the contrary, if the words are gold, they are not just worthy of but necessitate unshakable faith and certainty.  (Of course they may also not be genuine gold, in which case the whole matter may dismissed).
Doubt, as a matter of fact, appears again and again in Buddhist texts as a powerful affliction that is especially harmful to meditation.  Yet its opposite, certainty, is praised for its necessity in engendering the correct view.   As for Buddhism’s Middle Way philosophy that I am studying, certainty is required regarding the ultimate truth, emptiness.  One Tibetan philosopher, Mipham Rinpoche, explains that this certainty should be cultivated to same extent that one is certain that fire is hot – a conviction unable to be led astray by anything.  In Buddhism, this is also called faith.  Here faith is not necessarily the blind acceptance of doctrine, rather reasoning and debate are very much for the purpose of faith.
Although debates are left seemingly unresolved for millennia, their individual participants have been striving for just the opposite – unshakable faith.  In my plumbing the depths of Tibetan philosophical treasures, I too am very much in search of the same thing.  In light of this, I think I can reassure my roommate that I also hope for an end to my book buying.  Indeed, it will signify my own personal resolution.
-Ryan from Canada