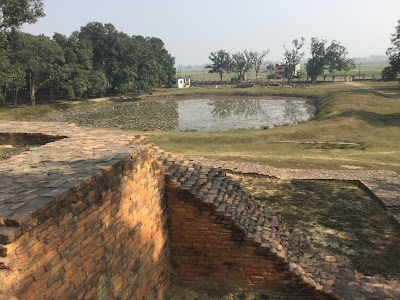 In the last winter break I went to Lumbini, the birth place of the Buddha for about ten days of semi retreat. There, I’ve decided to visit the ancient town of Kapilavastu, where prince Sidhartha grew up and left at the age of 29 in search of enlightenment.
As it was the time of unrest in the Terai and there was no public transportation, I rented a bicycle and paddled though the plains for a whole long and beautiful day. The area of Tilaurakot, which is about 25 km from Lumbini inhabits many ancient ruins of sacred places for Buddhists, including the birth spots of previous Buddhas. In Kapilavastu  itself one can stroll though the ruins, and even the famous “eastern gate” from which prince Sidhartha left through on the night he departed his palace is marked by archeologists. A few kilometers from there I biked to another isolated and special place called Kudan. This spot is identified as the meeting ground where the Buddha, about a year after his enlightenment, and seven years since leaving home, met his father, step mother, wife and his son, Rahula, who was ordained then and there, becoming the youngest monk. A few centuries later King Ashoka built monasteries and/or Stupas in all these holy sites, and although one merely sees ruins these days, the atmosphere in these neglected pilgrimage sites is unique and there is a palpable feeling of sacredness in these holy spots the Buddha abided at.