An important feature of the Rangjung Yeshe Institute’s environment is the perfect combination of
traditional monastic studies and contemplation with a high level of academic approach of studies
and research. Among the teachers and students in RYI we have several good examples that it is
genuinely possible to settle and to follow the spiritual path – based on the inner search and devotion,
attuned with a scholar engagement and scientific approach.

Recently a group of students were guide by the professor Diane Denis – an authentic example of this
precious combination – in a trip, in Nepal, to some holy places and archaeological sites related to
Buddhism. 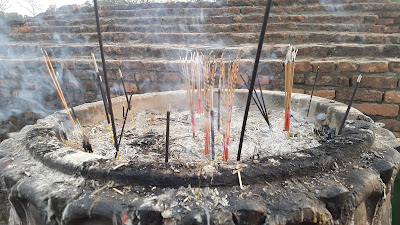 In Lumbini we not only had plenty of opportunity to do our personal practices in the Mayadevi Temple – place where the Buddha’s birth occurred, but also, in a pleasant afternoon, the group did a collective recitation of prayers and of the Heart Sutra in different languages – such a special moment! There we also had a guided visit to the International Research Institute and to the local museum, and  we receive precious teachings from a Theravada monk, from the oldest local monastery. 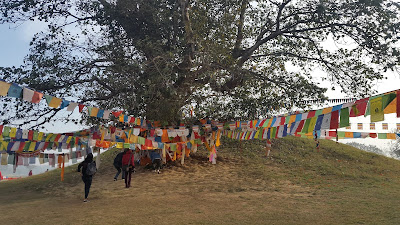 In the follow days we went to the archaeological sites of Kapilavastu, Kudan, Gotithawa, Niglihawa,
Ramagrama and Devadaha, all of them related to the places where Siddartha Gautama grew up and
lived relevant moments of his life, both before and after becoming a Buddha. 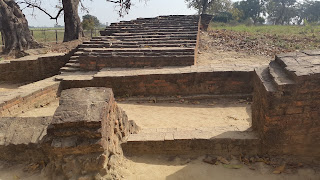 Kapilavastu, for example, is the place where  Siddhartha lived most of his childhood and youth, and where, after living isolated from external reality in an environment carefully prepared by his father,  important facts unfolded: his first contact with disease, aging, death, and with the serene bliss of a renounced ascetic. It is quite impacting to see the place where Siddhartha crossed one of the gateways of the fortress where he lived, leaving behind his family, wife and newborn son, in search of an answer to the end of the endless suffering inflicted on all beings. 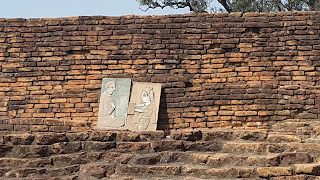 Kudan is other very meaningful place. The ancient Nyigrodharama, is the historical site where Sakyamuni Buddha met for the first time his father King Sudodana, and where there are two important stupas, one where his son, Raluna, was ordained as a monk of the Buddha’s sangha, and another were his foster mother, the Queen Mahaprajapati Gautami offered to Sakyamuni one set of monastic robes – certainly nourishing in her heart the authentic aspiration that she herself could soon use one of those robes of renunciants.
Each all these places have their historical peculiarity, but all of them are overflowing in opportunities
to us to connect with the steps taken by the Buddha. 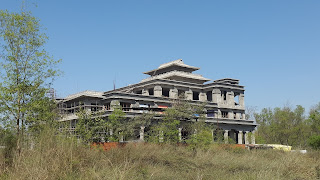 In the last day we lived a really special heart-warm moment, certainly the result of our connection by karma and aspiration. In Lumbini there are several big temples from different Buddhist traditions and from different countries. One of them is still in construction, but already express its magnificence and potential to be of benefit for many beings. It is the temple that is being built by Chokyi Nyima Rinpoche, the beloved master that guide and inspire us in the RYI.
When the sun was beginning to set, we climbed to the top of the building and each one had the
opportunity to express high aspirations and make offerings of prayers, recitation sutras in different
languages, and performing songs of realization composed by realized masters… All these offerings
were pervaded by the aspiration that may this place be of a perfect and right condition for studies and
practices of the Buddhadharma, and that may everyone that come to this place attain complete
realization!!! – Hands in prayer…
By Jigme Choedzin, from Brazil.