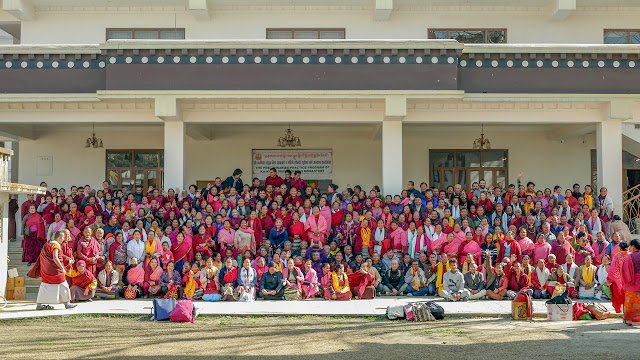 During December, Kathmandu is cold. Especially in the early morning and the late evening, it is cold outside as well as inside. Most of Nepali houses lack heating system and running hot water, which means that wearing many layers of cloths, patching one’s body with hot water bottles and drinking hot chia are the common ways to keep oneself cozy and warm. For many Nepalese the day starts early, much earlier than the sun’s awakening. Around 4am the sounds of neighbors engaging in household activities (cleaning, cooking, and so forth) and the footsteps of those who are walking towards the stupa or heading to catch a bus are already audible. Nepal starts before sunrise, especially at times where the monasteries open their doors early morning to invite both lay and monastics to practice together.
Such was the case in December 2018 when, during the course of one month, 450 people (approximately 95% from the Himalayan region and the other minority from countries such as Vietnam, China, Russia, Europe, USA and South America) attended the ngondro (preliminary practices) retreat at the Ka-Nying Shedrub Ling (Bouddhanath). Many of the practitioners travelled all across the city; they came from Patan, Swayambunath, Bhaktapur, just to name a few places. Although those places in Nepal may not be far in terms of actual distance, given the poor condition of Kathmandu roads and public transportation, much time and energy to come to Boudha is nevertheless needed.
The ngondro retreat happened everyday from 6am to 6pm. Nepalese are usually renowned for “late arrivals”; however, in this occasion, by 5:30am most of them where already sitting in the temple, awaiting for the gong to announce the start of the morning session. At times of big gatherings (such as the Fall Seminar with Chokyi Nyima Rinpoche) the temple walls embrace no less than 1000 people. Nevertheless, because the ngondro retreat includes practices such as prostration that require a bigger personal space, this was an occasion where several practitioners had to accommodate outside the temple’s main entrance doors. Every morning, when I walked by the temple’s entrance and went up the stairs to go to RYI’ language class, I encountered more than 20 practitioners sitting outdoors engaging with their sādhana. It deeply touched my heart to see so many diligent practitioners willing to put up with so much hardship to accomplish a practice that, from the beginning, is meant to benefit countless beings.
Retreatants, mostly lay community, had the precious and extremely rare opportunity to practice with monastics and receive detailed instructions from the senior experienced monks. In addition, daily teachings were translated from Tibetan into Nepali, English and Vietnamese, making the transmission accessible to all the members of the gathering. Furthermore, the monastery not only opened its doors and made the temple and the teachings available but, during the whole month, each and every day retreatants were served breakfast, lunch and refreshments. By the request of Chokyi Nyima Rinpoche, everything was offered for free — practitioners did not have to pay a single rupee for the teachings, the facilities nor the food. Acts of invaluable kindness such as this are not only touching and mind-blowing but, actually, exemplary for all the sangha members and beyond.
I had the opportunity to talk to several of the participants and, almost unanimously, they all emphasized that the retreat had drastically enhanced their confidence and devotion towards the teachings of the Buddha. Some retreatants particularly highlighted immense gratitude towards receiving a thorough detailed explanation on how to perform the practice, and expressed to have developed greater familiarity with technical details such as visualizations. Others underlined the preciousness of sharing the practice with hundreds of practitioners, stating that the group gathering was an enormous support for keeping themselves inspired and diligent. Others, when asked about their experience, were notably touched and remained speechless, allowing their silent presence to reflect the vastness of their appreciativeness. And others, particularly westerners, shared their whole-hearted aspiration to contribute for the flourishing of similar type of retreats in their own countries. In brief, it became clearly evident that retreatants were profoundly touched by the practice and acknowledged a significant heart-felt personal transformation.
The next ngondro month retreat will probably be offered at Ka-Nying Shedrub Link during December 2019. May all practitioners who wish to attend be able to do so without any hindrances and, through their practice, may they fully accomplish the profound sublime dharma!