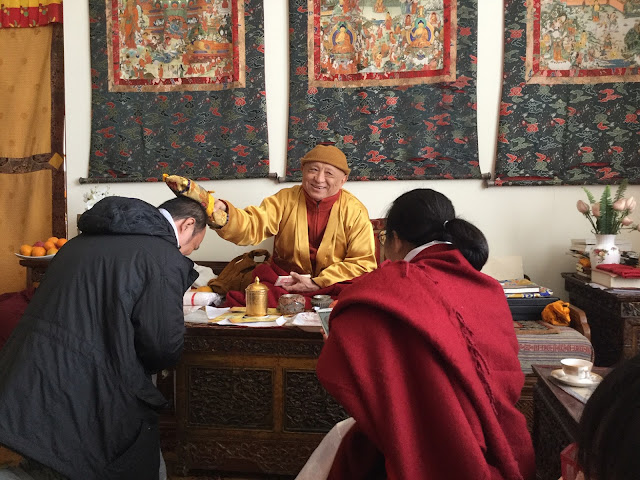 I am a mature aged student (I just turned 51) studying at Rangjung Yeshe Institute for the last seven years.  I have just completed my second four-year bachelor’s degree, this one is in Tibetan Buddhism and Himalayan languages, and I am about to start an MA prep year in order to focus just on the Tibetan language in preparation for starting the MA in Buddhist Studies next year.

I had no idea that I would still be here after seven years when I first arrived, but I really enjoyed my studies, so I kept staying for another year and another year.  I also had no idea that I would ever do a master’s degree. So, I suppose a lot has changed for me in seven years. I chose to study part time because I was older, and I didn’t want to rush my studies. I wanted to learn things properly. But I also chose to study part-time because I was lucky to have a part-time job from home that I have been able to do online.  I would not say that I have had a lot of fun in the last seven years because I have mostly just studied and worked. It is important to say the studies here can be quite challenging and that the program can be quite intense. But I love what I am doing. It feels really meaningful.

Studying here is an extraordinary educational experience.  Although we are studying at a university, it is also set within the living tradition of a Tibetan monastery and within a Tibetan community and at a Buddhist holy site as well as being surrounded by the places of Buddhist history and places where famous masters have practiced.  It is a kind of total immersion experience into Buddhism and Tibetan Buddhism as well as Himalayan languages and cultures.  And because it is such an extraordinary place, there are always western academics coming to the area to do research, who often give talks at RYI about their work, as well as Tibetan Buddhist teachers who frequently give teachings in the Kathmandu area. We are not just reading about Buddhism and writing papers, we are living and experiencing it every day in ways that are constantly surprising. 🙂
~ Erica from US/Australia