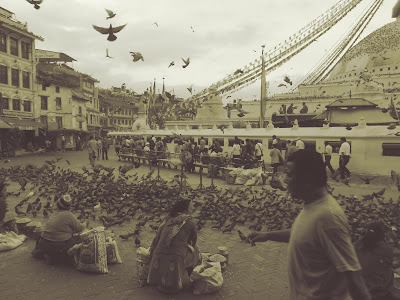 Wondrous! Wondrous! Wondrous!
Homage to the Lord.
Tathagata, who knows all,
Tathagata, in an eagle’s flight….
Boudha. A place like Mewlana‘s slaughterhouse, graced with forgotten whirls of ancient ragas. Its sattvic invitation attracts the purification of blood and flesh. The human race of consequential strategies, traveling through the ganges of life – I have smelled it here.
Feeling it in the bones, the shimmering of the pure, experiencing the flux, out of circumambulations, like ebb and flow, we go — round and round, hopping like sparrows in between, round and round again, we go on, while getting by, we go on. And Now!

Of our hunger,
here we are,with contempt
towards the food,having forgotten
how to eat,stumbling over one anotherin an illusion of queues!

(we) Unlike Ananda– who drove into an equipoise while narrating how Buddha stood in the lap of chaos to beg, like a deep rooted tree wearing robes as bark. The illumination remains, Buddha still begging, but the great Ananda, who repeated the very beauty of the chaos which Buddha tendered, is forgotten. Every movement of Buddha’s body was framed in the gallery of Ananda’s mind– concealed and honorary in its gracious beauty. Some eyes still hold the baton of those galleries– galleries unseen and unheard but which resemble every corridors of mind. Eyes empty like those of Ananda, whose cup only receives the sun of the illumined panorama. Panorama: the epithet of Avalokiteshwara.
Meanwhile, shunyata is in a rendezvous with karman. Mysteriously enough, we are in both of their cups.
The grammar of history tells us that it combines the three practices of communion, the heart with its prajna, the pineal offered to the lotus where the mud around its stem remains “pure mud.” This moment is to be dedicated to contemplate those constellations of wisdom.
Dharma beholding rtú, the seasons,
are the union with this flux– The Vairocanalinga.
Watch it happening!
Contemplate the “progress of shunyata.”
Chokyi Nyima Rinpoche, a forerunner of inspiration, has made a garden in Boudha for the wish fulfilling tree to manifest in our realm. Out of his unfathomable compassion he points at our karma’s tiredness and instructs us to follow the translations of our very life itself. We missed it then, still are missing, and the very point of our celebration is being delayed. But our prana is tender and allows us to forget in its hidden mist of transmissions. At the hilltop even the bourgeois fog passes. It is still difficult to put anything regarding Rinpoche’s motivation into words, and in our very attempt with words we make hopeless desires of their inertness. Departing from dvaita, the duality inherent to  intellect, we arrive to the advaita. Still, beyond words the dvaita lingers. Once this duality resides, compassion is poured into the stream of consciousness and we see the gate of Maha Yana… Open!
Compassion, the purification-– Bodhisattvas’ only desire.
Bodhisattvas, the jewels of Maha Yana,
once seen on sravasti roads
where the wind stayed calm,
listening to their chariot wheels
roar like thunder!