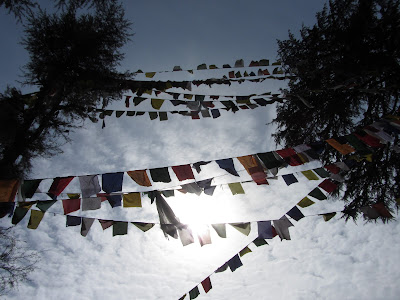 Every day, when I practice, I start by contemplating the precious human body, endowed with all the freedoms and advantages. Often it may seem quite repetitive, to go over the same reflection every day, the same features of life which I should cherish. Yet every now and again something happens that really brings it home, and makes some things that I take for granted stand out again in all their uniqueness.
Lately, that something was my trip to France during the winter break. Of course, life there in general is very different, and for a beginner in the practice it is difficult to keep the same rhythm and the same motivation when one is surrounded by people with very different interests and activities.
But even beyond that, something struck me in the ubiquitous public debates surrounding the January events in Paris (the terrorist attack on a satirical newspaper for its drawings of Mohamed). Though France is a pretty free country compared to most, and my point here is not to criticise its system or the freedoms and rights that it allows, the general discourse there is one of overwhelming secularism, which acts as an authoritarian ideology that some people seem to cling to as much as others to their religion.
Muslims for instance have recently been speaking out about the awkwardness they feel when wearing traditional robes in the street, and the whole debate about the space allowed to religion in the public sphere came out to the forefront.
Though it’s hardly comparable to the tensions there are around Islam in the West (and in many other places), I must admit I would not feel very comfortable reciting mantras in the street in France like I, and most everyone else, do here in the streets of Boudha. Certainly our position here as strangers is particular, and I would not argue that the average Nepali has more freedom of religion than Europeans do. However, the pressures and the general attitude towards religions are very different here. And though I have not heard of religious fundamentalism in Nepal, nor of much coercion towards the practice of any religion in any given community, there is also no general awkwardness felt towards the practice of religion, which isn’t perceived as some backward, or at the very least eminently private, practice which one should keep for oneself, within decent civilised society….
And I think that is part of the reason so many of us are here, because we have found the freedom to practice without shame or secrecy, and moreover with a community around us that supports this practice and inspires us to it. And seeing monks Newaris and Western students all practicing Chod together last week, an event for which, thanks to Rinpoche, all classes were cancelled, beatifully illustrated the unique opportunity which has been offered to us all to follow the path of our choosing.
~Oriane from France