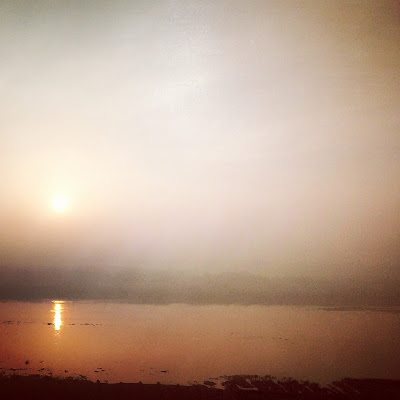 In the middle of the night, the air in Delhi is orange with pollution, or maybe with fate, which hangs in the air in every city after the occupants have slipped out into sleep. Arriving one year and a half later was surprisingly the same.
In the summer, the air in Delhi had sunk to the earth. That night, early spring, it was lifting off on a cool wind; the barking of mangy dogs whisked up into the dark like the wings of the birds that still flew, at that late hour, above the trash-banked river. An unseasonable rain.

apple breath
early light
filling moon
crane in flight
Every year, the rain comes and we tip back our heads to watch and catch it on our tongues.
Symptoms of nostalgia too much with weight rule out any warnings on the path.
Boudha is transformed by the rain. Clouds roll in from the south, passing over the Himalayas and picking up mist that’s been cycling while kalpa engulfed in Kalpana— soaking heads over and over, soaking into soil, soaking into roots.

“If one wishes to know the weather here, they are better off listening to mothers than meteorologists.”  unknown.