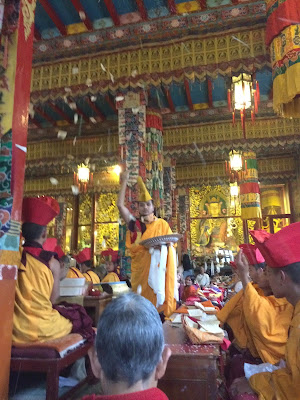 Nepal is truly a Shambala for me. In Nepal, you see dharma, you feel dharma, and you hear dharma all the time. Every day you are inspired to practice dharma by being around so many physical representations of the enlightened body, speech, and mind of the Buddha.
One of my favorite experiences here has been attending drupchen, which means “great accomplishment.” Drupchen is a Vajrayana Buddhist practice in which the entire Sangha, including both monks and lay practitioners, gets together to read an important sadhana. The drupchen that I recently attended was called the Ngakso drupchen. In this drupchen, we read a sadhana that is a terma (treasure) hidden by Guru Rinpoche and revealed by the Great Terton Dechen Chogyur Lingpa.
During the drupchen, while everyone is reciting the sadhana, the monks play a rich symphony of religiously inspired music with a variety of instruments, including drums, horns, and conch shells. The result is a holy and powerful atmosphere.
All kinds of people who come from near and far make many offerings, both large and small. It is thought that making an offering at a drupchen is very auspicious, so many take advantage of this opportunity to accumulate a great amount of merit.
I once read that the merit of attending a single drupchen is equal to the merit accumulated as a result of seven years of solitary meditation retreat. After reading that, I was inspired to sit through the entire drupchen, which lasted for nine days.
Chokyi Nima Rinpoche constantly reminds us about the importance of practicing dharma, each time explaining clearly that the true savior is not outside of oneself, but inside. In other words, he is telling us that only you save yourself. Each time he says this, he melts everyone’s heart and inspires us to practice dharma even more.
~ Dechen from Bhutan