Bachelor in Buddhist Studies Gampopa The Jewel Ornament of Liberation 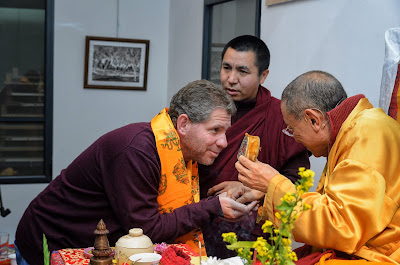 I have first come to Baudhanath in the autumn of 2001, met Chokyi Nyima Rinpoche and stayed for the annual seminar. On its last day I went up to Rinpoche and asked if I should stay on for the winter programme, and he told it’s a wonderful idea.

This was my first introduction to Tibetan language and Buddhist philosophy in the Tibetan tradition as we studied The Jewel Ornament of Liberation by Gampopa. The next year the BA programme started at RYI for the first time, and I stayed for one year, but felt more inclined to go for retreats. I felt at the time like focusing on meditation practice and was not sure if academic studies were my thing.
After quite a few years of doing this and that, basically roaming around in Samsara, I started to feel again a very deep urge to study the Buddha Dharma in earnest. That was exactly two years ago, while I was living in Bodhgaya and Rinpoche arrived there, as he does almost each October. Approaching him, he immediately saw right through me, as he always does, and told me “you have to study!” An order is an order, and here I am. Last year was wonderful, studying The Way of the Bodhisattva by Shantideva thoroughly, verse by verse and this year we’re going through Arya Maityera’s Distinguishing the Middle from Extremes.

Studying in depth these most important classic treatises of Buddhist thought and having Rinpoche close by certainly feels to me like “being home”.