March 23, 2012 by Admin
Every year, starting on the 8th day of the 12th lunar month in the Tibetan calendar—which usually falls in late January or early February—a nine-day ‘drubchen’ is performed at Nagi Gompa according to the Ngakso (Ocean of Amrita) sadhana belonging to the Chökling Tersar collection. These are the new terma texts discovered by the tertön, or “treasure revealer”, Terchen Chokgyur Dechen Lingpa, a great Nyingma master of the 19th century.
Some blog-readers may wonder: “What is Nagi Gompa? What is a drubchen?”
Nagi Gompa is a beautiful nunnery located high above Kathmandu, lying in the midst of the jungles of the Shivapuri National Park. 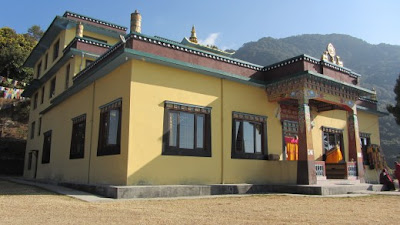 Nagi is an hour’s drive by taxi or about three hours by foot from Boudhanath. To reach the nunnery, one can climb the pleasant path of the natural reserve or, if you prefer, taxi up on the bumpy unpaved road. If one decides to take a taxi up to the nunnery, one must officially enter the park by way of the big front gate, sign in at the military post located there, and pay the entrance fee. The park closes at 5:00pm, when you should make your exit at the same gate, but the soldiers are lenient and you can leave a little later or on another day. For safety reasons, it is their duty to record who has entered the park. 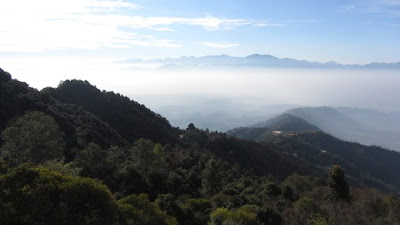 At Nagi Gompa, the air is pure, the sky is as blue and cloudless as the nature of your mind — the nunnery lies above the clouds of smog stacked above Kathmandu Valley. After reaching the compound, if you climb for two more hours, you will reach Mt. Shivapuri’s peak. From there, when the weather is clear, you can contemplate the breathtaking Himalayan snow mountains.

But let’s get back to Nagi Gompa and the drubchen. “Drubchen” means “great accomplishment.” It is a group practice in the form of a meditative retreat in the Vajrayana tradition; therefore, it is led by one or more experienced high Lamas. During the nine days of the retreat (which can also last seven or ten days, depending on the liturgy), practitioners continuously perform the liturgy, make feast offerings and recite the drubchen prayers and special mantras while seated together in the main temple. This is carried out by the participants in shifts, throughout the night, so that the practice and mantra recitations remain unbroken for the whole nine days.
There are various kinds of drubchens which invoke the blessings and siddhis (spiritual accomplishments) of different deities, such as Vajrasattva, Guru Rinpoche, Vajrakilaya and so forth. In the case of the Ngakso Drupchen, even the ordained practitioner would agree that the mandala of Guru Rinpoche, Chenrezig, Buddha Amitabha and the 100 peaceful and wrathful deities is rather complicated to visualize. Hundreds of deities are imagined both inside and outside of our own body. Nevertheless, my personal feeling is that the practice is very powerful, even for the beginner that I am – one who visualizes incompletely and imperfectly. Why? Because I believe that our own suffering and happiness, and that which we inflict on others, stems from the movement of our body, speech and mind. Therefore, I believe that this kind of practice is a remedy that can change our habitual tendencies, create the causes for happiness, free sentient beings from unfavorable circumstances, and hence dispel their suffering. And why do I believe that? Because after sitting for several days in a drubchen and reciting the sadhana and the mantras, I have seen beneficial changes.
For tantric reasons, this particular drubchen requires at least 108 participants. At Nagi Gompa, mostly nuns perform carry out the practice along with a number of monks and lay practitioners. It is wonderful to be in the midst of a predominantly female chanting group, supported by their powerful drums and trumpets. 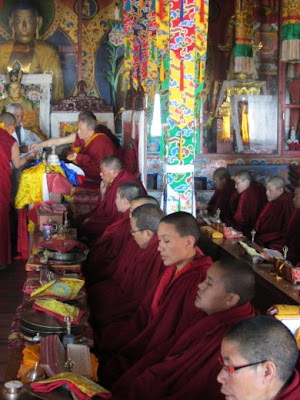 This year, the practice was led by Vajra Masters, Chokling Rinpoche and Chökyi Nyima Rinpoche. Their younger brother, Tsoknyi Rinpoche, also visited Nagi Gompa during the drubchen and we were blessed by the sublime presence of the three brothers. Thanks to all masters and practitioners! 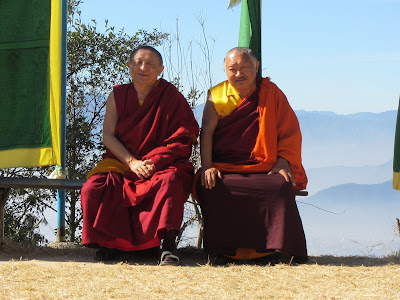