October 13, 2009 by Admin
What is called Dasain in Nepal, is one of the biggest and longest Hindu festivals celebrated all across the country and by all casts in Nepal. It is a two-week long celebration that symbolizes the triumph of virtue over evil or victory of god over the devil. This festival derives from the Hindu mythology where According to Hindu scriptures, goddess Durga slew the ferocious demon Mahisasura (Mahis + Asura), a demon in the form of a water buffalo, which terrorized people on different parts of the Earth. The almighty Durga in her various manifestations, names and forms is widely celebrated with pujas or worships for freeing mankind from the terror.
Various kinds of activities take place at the household during the Dasain period. A predominant activity that marks Dasain usually is the 8th day of the Maha Astami, the day of great sacrifice. Each family sacrifices a goat at a Durga temple, but chickens and ducks are slaughtered as well. The reason is that the animals symbolize the human weaknesses. Buffaloes, goats and sheep for instance are said to symbolize anger, lust and stupidity while chickens and ducks symbolize timidity and apathy respectively. Hence, the slaughtering of the animals symbolizes the victory of Durga and virtue over evil and faults.
However, regarding the Buddhist system of values, it seems like the saying that ‘Dasain symbolizes the triumph of virtue’ is a bit ironic as according to Buddhists, taking the life of any sentient being is a great non-virtue, even life in the form of animals like goats, chickens and so forth. Therefore from a Buddhist perspective the 8th day Maha Astami is marked by a massive accumulation of non-virtue, as it results in the slaughtering of so many sentient beings.
In the Tibetan Buddhist tradition, the question of whether the teachings should be interpreted literally or allegorical often asked. I suppose the myth of Durga and the respective teaching in the Hindu tradition is a good example of what happens when one mistakes the allegorical meaning for literal truth…
Taking into account the Buddhist system, then Maha Astami is an occasion that allows the slayers of countless animal to accumulate terrible evil karma. However for the Buddhist practitioners it can be an opportunity to practice the bodhicitta of aspiration by praying for the animals that are being slaughtered. Even the bodhicitta of application is practiced, as it is not uncommon to see Rinpoches, monks and nuns buying goats on that day to save them from the slaughter and spare the animals’ lives. Virtue vs. non-virtue…. They are relative… and they all blend together in the world of Kathmandu. 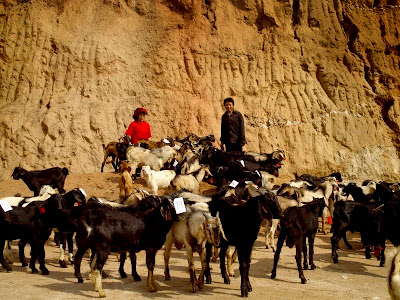