A visit to Kathmandu University with Pilgrimage to Namo Buddha 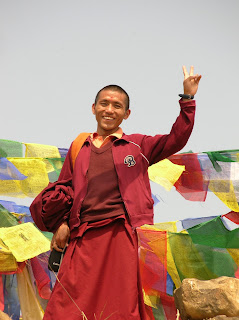 The months of March/April are a really nice time to be in Nepal. The temperature in the last weeks has been on average 27 degrees Celsius throughout the day and thus the field trip organized by the shedra was a very much welcomed change of the schedule.

The main destination of the two busses filled with students that left Boudha at 8:00 in the morning, was Namo Buddha.

This very important Buddhist pilgrimage site is related to one of the marvelous deeds performed by Buddha Shakyamuni in the lifetime directly preceding his enlightenment. It is said that the Buddha, at that time a young prince, after having seen a starving tigress that was unable to provide its cubs enough food, out of pure empathy and altruism, created a wound in his arm from which the tiger could drink to recoup her strength and then gave his entire body to the tigress, and was devoured.

On the way to Namo Buddha one passes the actual campus of the Kathmandu University (KU) in Dulikhel and we used that occasion to visit and familiarize ourselves with the institution. RYI is the Buddhist Studies campus of KU, and it is thru KU that RYI is able to offer accredited BAs and MAs.This excursion to one of the cultural highlights of Kathmandu Valley as well as to Kathmandu University’s main campus which offers us a lot of cost-free research facilities in Dulikhel, was a really nice trip. Even the more so since a number of non-shedra students could join the trip as well for around 250 Rupees.
Hoping that a similar trip will happen again next year,