Celebrating Losar with a Tibetan family 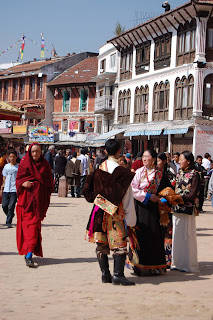 The highlight of the Tibetan calendar and also of living in Bouddha is the New Year, Losar, taking place in February. (lo = year, sar = new) Already weeks before the actual date all kind of preparations are going on: People clean up their houses and specially the house-shrines, prepare huge amounts of special biscuits called kabse and give order to make new dresses chupas.

The second last evening before the New Year according to the tradition the family joins together and eats a special type of soup called guthuk. (gu = 9, thuk = soup) Not only does this soup contain nine different ingredients, but also small pieces of paper, covered by bread on which symbolic words are written. Every member of the family will receive one of them and the meaning can be quite auspicious. There are words such as sun, symbolizing a friendly and shiny character, salt which means being lazy, moon for somebody who dispels other peoples obstacles or chilly representing a rather wrathful character.

The actual losar is to be welcomed as early as possible in the morning – and so all the family members get up before sunrise. Everybody offers blessing-scarfs (kathag) to each other and then the typical Losar-breakfast milk-rice dresil is eaten. At the first day of Losar tshepa dangpo one is supposed to stay at home unless one goes to receive blessings from Lamas or Rinpoches. One immediately feels that there is something in the air, a special and joyful atmosphere. Everybody is happy, making jokes, playing music, singing traditional songs and dancing. This goes on for the whole day accompanied by delicious food and Tibetan rice-beer (chang).

The second day is the date to visit friends and relatives and so the house quickly gets filled until there is nowhere to sit. Every guest is invited to do some aspirations by offering – throwing in the air – tsampa a type of flour and there is no way around a couple of cups of butter tea and some chang.
The newly made and beautiful chupas are to be worn the third day of losar when young and old joins together at the stupa, the center of Bouddha, welcoming the beginning year with a rain of tsampa, aspiration-prayers, traditional dances and songs, prayer-flags offered and hang on the stupa and family-pictures taken. In the afternoon one could either still celebrate at home or go to some party or monastery where Tibetan drama was performed.

May this new year, the year of Earth-Rat for everybody be just as joyful and pleasant as the celebration to welcome its arrival!