…from Sonam from Germany 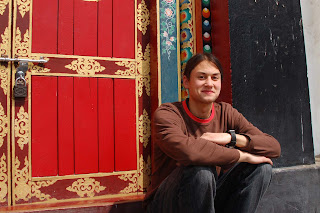 Hallo there,
my name is Sonam and I’m from Germany. I started my shedra studies in the fall semester of 2006, mainly with the intention to learn Tibetan.

Now, one and a half years later, the spring semester of 2008 has just begun. Shedra courses in Buddhist Philosophy as well as in Classical and Colloquial Tibetan enabled me to read original Tibetan texts and to communicate about their contents with the Khenpo (monastic professor). The efficient approaches of the language and philosophy classes that are both, modern and traditional, not only provide thorough preparation for the midterm and final exams, but are also of immediate use for the life in Nepal. Hearing the technical grammatical constructions of the Colloquial class spoken by little monks in the monastery yard or by other Tibetan speaking people here in Kathmandu/Boudha defenitely helps for progressing faster in language skills.

Throughout the period of my stay here in Boudha this place has always been quiet and conducive to studies. As long as there is no need to go downtown by taxi or bus, one hardly ever notices that there are transportation strikes and demonstrations happening in the city. But the frequent power cuts, bad roads and the shortage of water during the winter months of course remind one of living in a politically unstable country where there is no actual government. The suburb of Boudha in which the Shedra is located, stayed, as far as I can tell, mostly unaffected by revolt and demonstration and as I am a politically rather uninterested person, I did so too. Classes give you enough to think and read about, and Choekyi Nyima Rinpoche’ s magnificent Saturday talks are straightforward advices about how to deal with difficult situations in every day life.